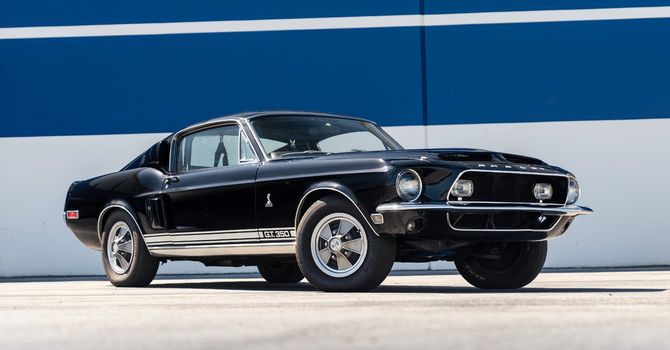 A souped-up 1967 Mustang fastback stars in “The Fast and the Furious: Tokyo Drift.” But Mustangs aren’t all about high testosterone. A 1966 convertible is featured in “The Princess Diaries,” and Ford said 27 percent of Mustang buyers are women.

William Clay Ford Jr., Ford’s executive chairman and the great-grandson of founder Henry Ford, is a Mustang fanatic, with 20 versions in his personal collection. Mr. Ford showed up at the company’s annual Mustang birthday party last month in a navy blue 1968 Mustang Shelby 500 convertible with a white top.

“I put it in the same category as the Corvette,” said Eric Minoff, an automotive specialist at Bonhams auction house in New York. The Mustang “is a cultural icon. Even people who don’t know anything about cars recognize a Mustang.”

Next week, Bonhams is auctioning several vintage Mustangs previously owned by Carroll Shelby, the racecar driver and automotive entrepreneur who developed high-performance Shelby Mustangs in collaboration with Ford starting in the 1960s. A 1968 Mustang GT 350 and a 1969 GT 500 are each estimated to fetch $80,000 to $100,000 at the June 3 auction.

I found a turquoise 1967 Mustang notchback that looked identical to my mother’s car listed on the Hemmings vintage car site for $37,900.

Those are surprisingly high prices considering how many Mustangs were made. “After the car first came out, there was a saying that hot cakes are selling like Mustangs,” Mr. Minoff said. “They’re not exactly rare. But no matter how common they are, they’re very attractive cars, and with the V-8 engine and rear-wheel drive, they’re very sporty and fun to drive. The fastback editions, especially with all the options, command quite a premium.”

Mr. Farley described the Mustang as a “mind-set” vehicle. “When we ask people around the world what they think of Ford, they say Mustang,” he said. “Mustang means freedom. It means taking a road trip in a convertible down the West Coast. That’s what people all over the world imagine America to be. Why would we ever give that up?”